POSTPONED UNTIL FURTHER NOTICE - An Evening With..... Louise Pentland 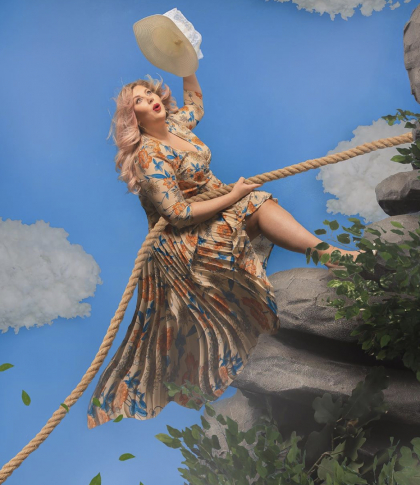 ** The health and safety of our team and customers is our priority and as such we have decided, along with Louise, to postpone this event until the Coronavirus threat has left our shores!

The Butchers Arms is proud to present – brand new for Spring 2020, An Evening With….. Louise Pentland – Sunday Times Number 1 Author, TV Presenter, Vlogger, Blogger and internet personality. Ever had a phone call from The Pope’s office, saying that the man himself would like to meet you? This lady has (and she did!)! Louise will regale us with her hilarious stories for one evening only from 7.45pm.
Pentland is arguably best known for her online work. She was working in a number of office roles when she began writing a craft and interior DIY blog named "Sprinkle of Glitter". In January 2010, Pentland began her YouTube channel, also named "Sprinkle of Glitter". At first the channel covered beauty, fashion and lifestyle; it has since expanded to include motivational and advice videos. In August 2012, Pentland began a second channel named "Sprinkle of Chatter", where she uploads lifestyle vlogs. Pentland grew up in Northampton. In 2003, she moved to Liverpool to study Psychology and Biology; she attended Liverpool John Moores University and graduated with honours in 2006. Pentland is a firm feminist and has interviewed Labour Party leader Ed Miliband during the 2015 United Kingdom general election. On 2 November 2014 she performed a pilot of her LouiseLIVE stage show in Northampton, her home town, and went on to take it on tour around the UK 3 years running. She has interviewed big names such as Camilla Parker Bowles, the Pope, Prince Charles, Kim Kardashian and many other leading figures. This evening is for everyone who’s had a child, a job or looked at the internet! With hair-raising hilarious true stories from Louise’s career and her life as a working mother. Definitely one to venture out for, this is set to be a VERY interesting night!
Join us on Tuesday 24th March for an evening of laughter and a real insight to stardom in 2020.
We are opening the restaurant an hour early (so open from 5pm) to allow you time to eat before Louise begins.
We anticipate this to be a very popular event so book now to avoid disappointment.
www.thebutchersarms.pub
01327 358848

Keep an eye on our facebook page and website for more great guests at our An Evening With..... nights! **This is a free event so we recommend arriving in plenty of time and booking a table for dinner well in advance if you wish to eat before**

Tagged under
back to top